Tel Aviv is now the most expensive city in the world

ISRAEL’s Tel Aviv has leapfrogged Hong Kong and Singapore to become the world’s most expensive city to live in, according to the Economist Intelligence Unit (EIU).

The Israeli city climbed from fifth place last year to top the Worldwide Cost of Living 2021 report for the first time, pushing Paris down to joint second place with Singapore. Zurich and Hong Kong rounded out the top five.

The soaring shekel and price increases for goods including groceries and transport were the main factors in Tel Aviv taking the top spot, according to the EIU. 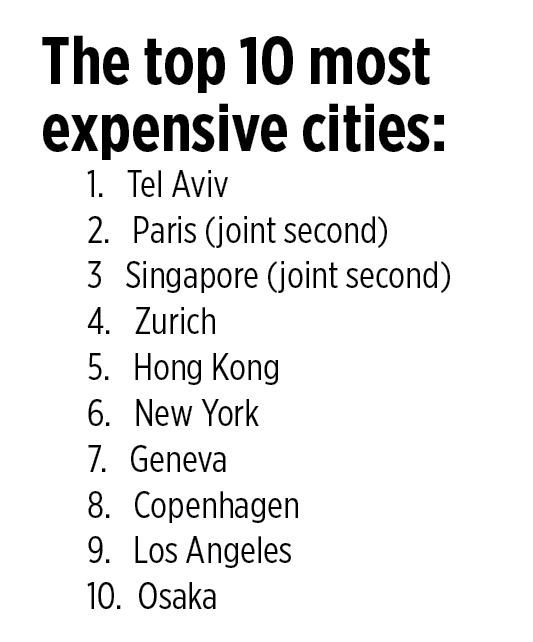 It said prices for goods and services studied across cities had risen 3.5% year-on-year in local currency terms, compared with 1.9% last year. The inflation rate was the fastest recorded for the past five years. Cost increases were biggest for transport as higher oil prices boosted the price of unleaded petrol by 21%.

Other key findings in the study include:

• Hong Kong had the most expensive petrol prices, at $2.50 per liter

• The Syrian capital of Damascus remains the world’s cheapest city

Upasana Dutt, head of worldwide cost of living at EIU, said in a statement: “Although most economies across the world are now recovering as COVID-19 vaccines are rolled out, many major cities are still seeing spikes in cases, leading to social restrictions. These have disrupted the supply of goods, leading to shortages and higher prices.

“Over the coming year, we expect to see the cost of living rise further in many cities as wages increase in many sectors. However, we are also expecting central banks to raise interest rates, cautiously, to stem inflation. So the price increases should start to moderate from this year’s level.”

The Worldwide Cost of Living is a twice-yearly survey conducted by EIU that compares more than 400 individual prices across 200 products and services in 173 cities. — Bloomberg

US posts nearly 1M COVID cases in a...

January 5, 2022
Join The Exclusive Subscription Today And Get Premium Articles For Free
Your information is secure and your privacy is protected. By opting in you agree to receive emails from us. Remember that you can opt-out any time, we hate spam too!