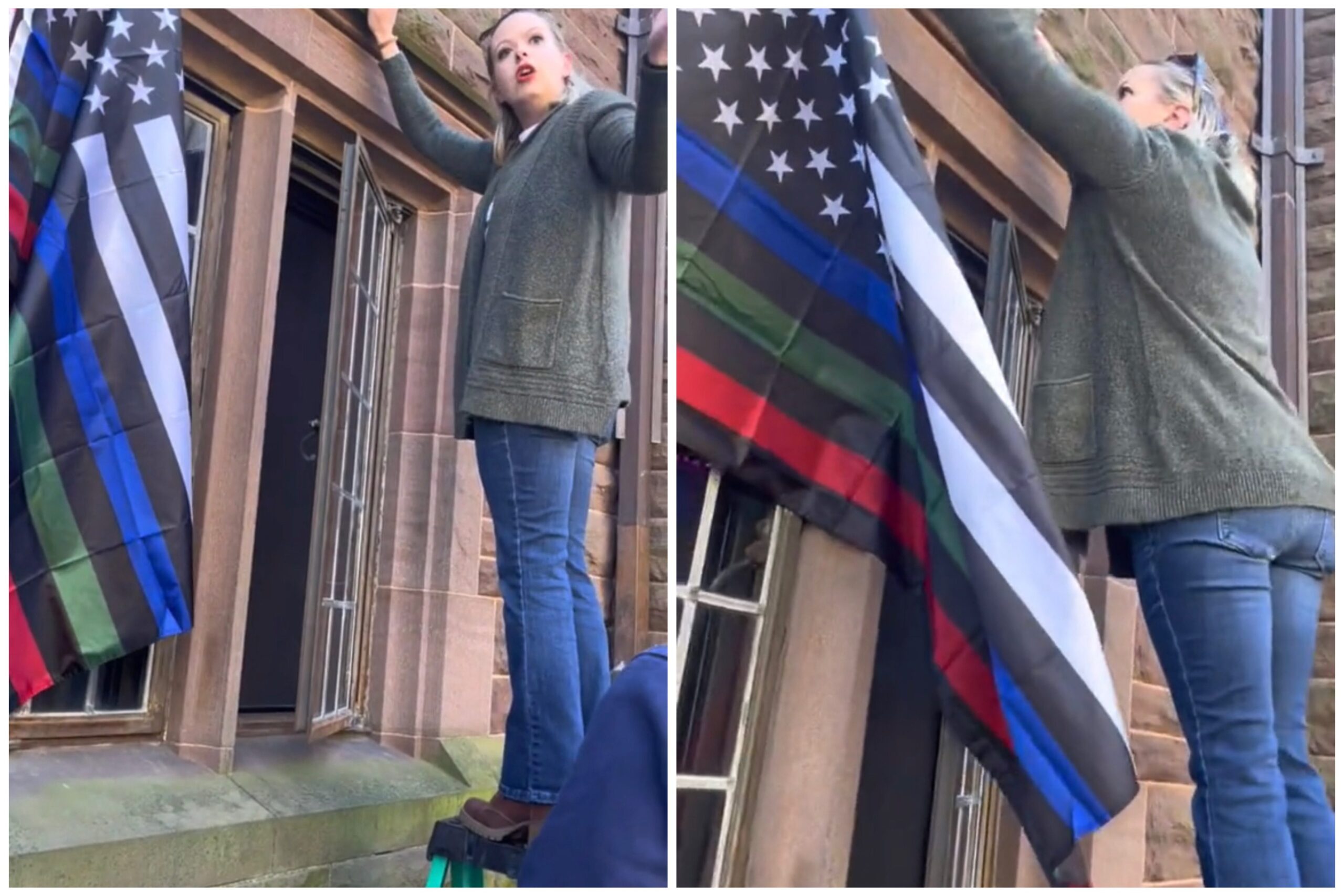 Last week, Connecticut’s Trinity College sent campus employees to forcibly remove and confiscate a student’s “Don’t Tread on Me” American Flag and a red, blue, and green line flag supporting the police, troops, and firemen while allowing other flags including Pride flags to fly.

In a now-viral video, a member of the school administration can be seen tearing down American flags, reportedly at the instruction of the dean.

“You are directed to take it down,” the staff said.

After being told to stop recording, the student responded, “I have every right to record, and you know that. This is America. We have the First Amendment right. Freedom of speech. Freedom of expression. I don’t know why you’re taking my flags out,” Lucas Turco, a student from Trinity College responded.

“So you’re going to take down the other flags?” he added.

“Everyone’s being asked to take them down,” the staff said.

“They’re being asked, but our flags are being ripped off. Do you think that’s right? I don’t know who you are. I know you’re a stranger and you’re ripping my flags off. So what about that flag right there? Why don’t you guys pick that one first?” Lucas said.

Below is the excerpt:

I would like to offer some background information and personal perspective on the events that transpired on campus today. A few days ago, my roommate Lucas Turco and I noticed several beautiful flags hanging outside of people’s windows around campus, showcasing topics they enjoyed and ideologies they may identify with. Such flags included LGBT rights flags, American flags, and other wonderful ideological organizations they personally support.

The “Don’t Tread On Me” flag is based on the original Gadsden Flag from the 1700s which demonstrates resistance to tyrannical rule and unwavering support for freedom and equality for all people. This was a rallying cry for our brave ancestors who fought so we could have independent rule. The Red Line, Blue Line, and Green Line flag expresses our support for our first responders and military members, as we feel the majority are heroic and good people that serve our communities. You may agree or disagree with these ideologies, and that is totally fine, but we feel that we should have an opportunity to express them under the First Amendment right to freedom of speech and expression.

Sadly, however, these flags were reported to the administration as offensive, and a representative for the administration came to forcibly remove them. When we asked for clarification on the grounds for their removal, we were told that no flags were to be hung on campus. Despite this, no one else who has a flag hung on campus has been told of this rule, and obviously no one else has had their flags forcibly removed in this fashion. We personally respect and love all people and think that you should be able to show support for ideologies you identify with. If the school has a rule that no flags can be affixed outside of a dorm room, that is perfectly reasonable, we just ask that this rule is applied to all parties equally.

In an Instagram post, Lucas expressed his disappointment that national pride is frowned upon in today’s society.

“The flags were hung out of love for our great country,” he wrote. “To support the police, troops, and firemen who have risked their lives just to provide our freedom and safety.”

“The flags represent freedom and anti-tyrannist government originating against the British. Our flags were forcefully removed, whilst other flags remain to fly. It is outrageous for the school to suppress my beliefs because they disagree with them. It is a shame that patriotism is shunned and being proud of one’s country is viewed as offensive. The problem of free speech censorship canceling anything contrary to the perceived status quo, strips individuals of their voice thus disabling the democracy this country was founded upon.”

Students at Trinity College were reportedly informed Monday through email that they are not permitted to hang items outside of their windows. However, they still allow other flags including the transgender flag to fly.

“We are writing to remind you of the Window and Screen Policy from the Residential Safety portion of the Student Handbook, as it relates to objects placed outside of windows in residential buildings. Regardless of the content, all items hanging or posted outside of your windows need to be removed and placed within your room immediately. In order to be fair and respectful of our entire community, we are asking that you please familiarize yourself with the Residential Safety Policies,” according to the email.

In response- Trinity reportedly sent out this email today telling students they can’t hang things outside their windows. However the student involved sent me this photo today- transgender flags are still allowed to hang proudly. pic.twitter.com/fu1hsNZ5o7

The Trinity College was proud to show its solidarity with the LGBTQ community by showing off a pride flag.

Here is @TrinityCollege showing off a pride flag hanging from their Art Center while they force students to remove flags they don’t like. pic.twitter.com/XndiZcW8KJ

DYSTOPIA: Shanghai’s Disney Resort Locks All Visitors Inside After One COVID Case