Colleges have been overrun by far-left professors.

The fliers attacked Harris for starting a chapter of Turning Point USA on campus – they called TPUSA a “national hate group.”

Here is a photo of the flier: 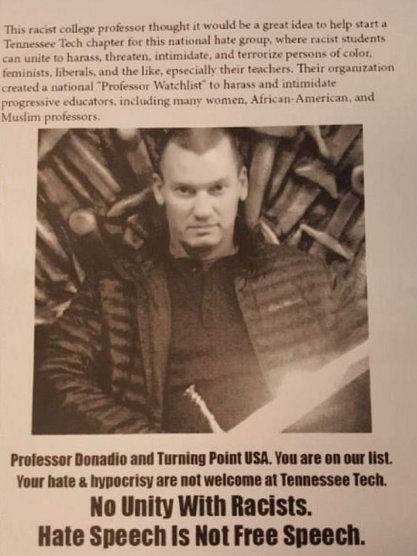 The professors were sanctioned by Tennessee Tech – they sued the university.

From inside higher ed:

The two professors who made the flier, Julia Gruber, associate professor of German, and Andrew Smith, senior instructor of English, each experienced several sanctions following the incident, including being ineligible for raises for a year and not being able to supervise student groups or participate in study abroad activities or faculty-led trips for two years.

Provost Lori Bruce said that the posters were meant to target one individual, a coworker, and a small group of students to threaten and harass and intimidate them, [and] to incite others to participate in the harassment.”

A court upheld the sanctions against them.

Sanctions will stand against two liberal professors who labeled a peer and a conservative group “racist” for their views and activism, a judge ruled.

Provost Bruce wrote in her sanctions that the anonymous posters were clearly meant to “target one individual, a coworker, and a small group of students to threaten and harass and intimidate them, [and] to incite others to participate in the harassment.” The posters were anonymously distributed on campus in February 2021.

Donadio (pictured, with student leader Gittle Sciolis) is involved with the campus Turning Point USA group, which Gruber and Smith also accused of racism through their fliers.

A win against left-wing bullying on college campuses.